The Most (and Least) Popular Holiday Foods in the U.S.

’Tis the season for all things festive! From gifting to family traditions, we all have our preferences regarding how we like to spend our holidays. However, one thing creates more division than a holiday paper plate: our favorite foods.

To determine the most and least popular holiday foods across the country, we surveyed over 2,100 Americans, asking their opinions on Thanksgiving and Christmas foods, including entrees, sides, desserts, drinks, and even vegan alternatives. Read on to discover what we found.

The Most (and Least) Popular Thanksgiving Foods

Turkey, stuffing, and cranberry sauce are some of the classic components of an American Thanksgiving meal. After compiling a list of about every Thanksgiving food we could think of, we asked respondents to indicate their preferences.

The Most Popular Thanksgiving Foods

The most popular Thanksgiving foods in America, based on the percentage of respondents who indicated they like the food, include:

We compared the results on a state-by-state basis to determine the most popular food in each state, then produced a map to show the unique preferences of each region across the country.

In particular, sweet potato pie is preferred in the South, standing out as the favored food in states like Mississippi, Louisiana, and Alabama. Pumpkin pie is well-loved in midwestern states such as Missouri and Ohio.

Interestingly, turkey (the mainstay of Thanksgiving dinner!) is the favorite Thanksgiving food in only two states, Virginia and Nevada. The vast majority of Americans prefer Thanksgiving sides and desserts, mostly pie.

Similarly, we broke down the results by state, to get a sense of the least favorite Thanksgiving foods across the country. The following map displays our results.

Regional preferences stand out here. For example, northeastern states really don’t enjoy green bean casserole, with states like New York and Pennsylvania ranking it as their least favorite dish. Southern states, on the other hand, are not fans of pumpkin pie, according to states like Georgia, South Carolina, and Arkansas.

The Most (and Least) Popular Christmas Foods

Moving on to another popular year-end holiday, we decided to take a look at Americans’ preferences regarding Christmas foods. Thanksgiving foods are well-defined, but Christmas foods aren’t exactly the same across the board.

Knowing each culture has its own Christmas traditions, we focused on the most common Christmas dishes that are notoriously associated with the holiday and are not tied to a particular culture.

The Most Popular Christmas Foods

Nationally, these are the most popular Christmas foods in America:

Along with mashed potatoes that rank as the most popular Thanksgiving food, it’s clear that Americans are in it for the potatoes! Take a look at how Christmas food preferences vary by state.

From brie in California and Oregon to pigs in a blanket in Michigan and Indiana, it was interesting to see how different food preferences came into play across the country. One thing that’s notable about Christmas is the variety of meat preferences.

For example, lamb is preferred in states like Minnesota, Florida, and Massachusetts, while prime rib is preferred in Texas. Roast beef is the favorite dish in Pennsylvania and Missouri, while Wisconsin and Louisiana love duck.

We determined the least popular Christmas foods in America, including the following:

For our regional last map, we displayed the least popular Christmas food according to each state. Some regions certainly do seem to share the same tastes!

For example, southern states like West Virginia, Arkansas, and Mississippi are not fans of brie. Midwestern states such as Minnesota, Illinois, and Indiana do not particularly like Christmas nuts, such as chestnuts. States in the West, like Oregon, Utah, and Colorado, do not prefer fish on Christmas.

One Christmas dish that is a baking tradition for many is Christmas cookies. Given that there are so many choices, we wanted to determine which cookie recipes Americans are actually baking.

According to our respondents, these are the most popular Christmas cookies in the United States:

How Much People Drink During the Holidays

Outside of particular dishes, we also collected data on other aspects of holiday meals, such as drinks, vegan alternatives, being budget-conscious, and ordering takeout. The next couple of sections will cover those topics. 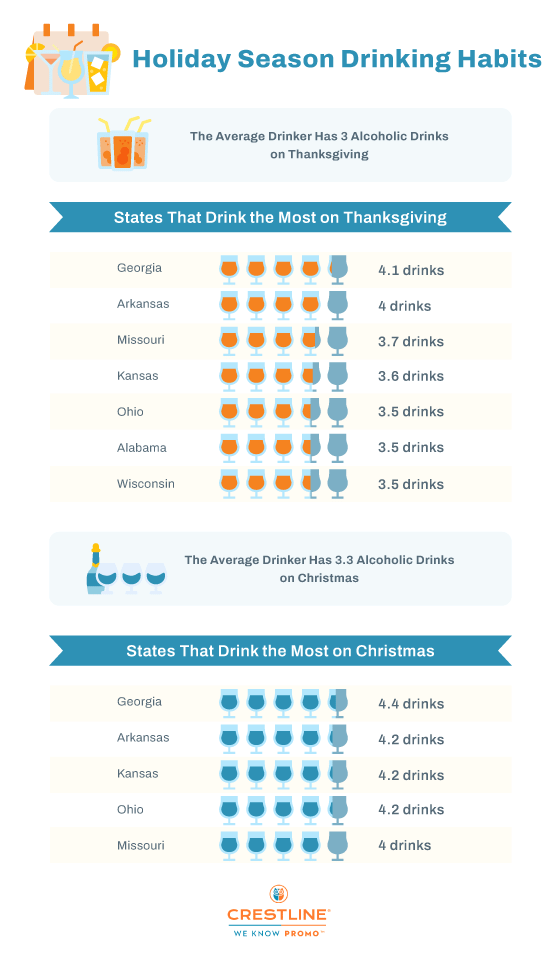 Of respondents who drink alcohol, the average respondent has 3 alcoholic drinks on Thanksgiving. The states that drink the most on the Thanksgiving holiday are Georgia, Arkansas, and Missouri, with 4.1, 4, and 3.7 drinks, respectively.

Similarly, of respondents who drink, 3.3 is the average amount consumed on Christmas, meaning Americans consume more alcohol on Christmas than Thanksgiving on average. Georgia is also the state that drinks the most on Christmas, with 4.4 drinks. Arkansas remains the runner-up, with 4.2 drinks, but tied with Kansas.

The Prevalence of Vegan Alternatives at Holiday Meals

Finally, we were interested to know how many Americans were interested in trying vegan alternatives to popular holiday meat options this year. Nearly 1 in 4 respondents were willing to try at least one. 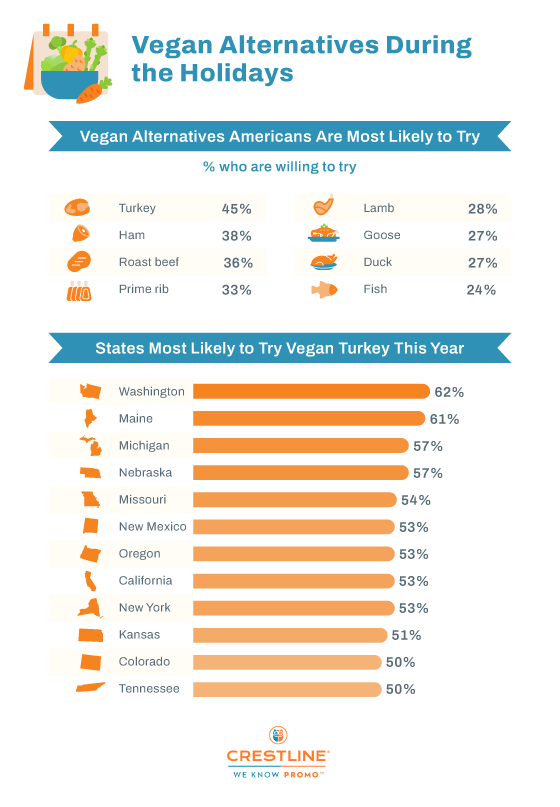 Vegan alternatives won’t keep costs down though, and 69% of Americans reported that they will search for budget-friendly holiday meal options due to higher food costs. While home cooking is always preferred for the holidays, 16% will order takeout for a holiday meal this year.

As divided as we are when it comes to food preferences, holidays are about coming together and experiencing new and old traditions. Celebrate the people in your life with a custom gift, and don’t forget to pass the potatoes!